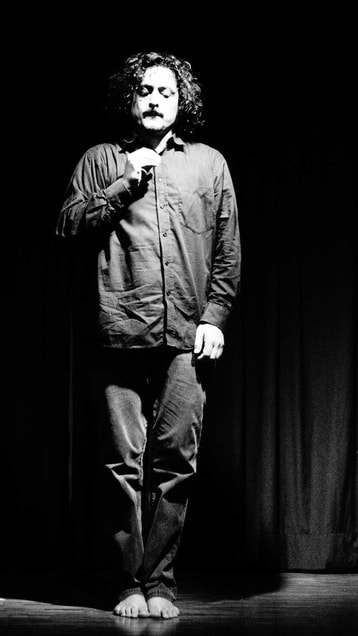 Federea is a composer, improviser and performer born in Argentina and based in Mexico for several years. His work includes -from a personal and heterodox approach- sound arts, performing arts and interdisciplinary crossovers in the fields of creation, research and pedagogy.

He creates stage shows in solo including music, poetry and video, and presents concerts of piano, non-conventional instruments and new technologies.

His work has been awarded in different occasions (Iberescena-Ibermúsicas, International Radio Biennial, SONOM International Sound Art Festival​). He has done creation residencies and offered conferences and concerts at institutions and forums of different countries, and has published articles in specialized music and performing arts magazines.

Since 2010 he has developed creation projects in collaboration with the choreographer and stage artist Talía Falconi through the company Ella y el Otro. They have been presented together in various international cities, festivals and forums with works created, directed and performed by themselves. They also have made in collaboration residences of choreography with original music and video-dance works.

His training includes piano, guitar, composition, conducting, Andean flutes, percussion, electroacoustics, combined arts, architecture and audio-visual media. He obtained a bachelor’s degree in Music Composition at the National University of La Plata (UNLP), Argentina, where he also taught for several years and was a member of the Contemporary Music Ensemble. In Mexico he had fellowships and supports of the National Fund for the Culture and the Arts (FONCA) and the National Autonomous University of Mexico (UNAM) where he completed the Master’s degree in Music Composition.